This view came with and preloaded test case, so you may just click on it and start to analyze the data.

It is also designed to work with any file with the JCAMP, NetCDF, or mzData formats. This files can be drag and dropped or selected clicking in the same drop module. These files are going to be displayed in the list below, specifying the name of the file.

When the desired file is clicked, the corresponding chromatogram is displayed, according to the following options:

Peak picking in the chromatogram​

The result of all the selected peaks are stored in the browser, allowing to safely reload the page and continue working from the current selection. Each peak consist of a retention time, the retention time when it begins, the retention time when it ends, the integral between these values, the relative integral and the calculated monoisotopic mass. Each peak also have a zoom action, that allows to easily visualize the peak region. This peaks in the plot also have a red rectangle that indicates their position and a green line that joins the beginning and the ending points of the peak.

The automatic peak picking task is done using some parameters that allows to filter and improve the results. This peak picking is based on the analysis of the first and second derivative of the chromatogram, therefore the beginning of the peak is where there’s an inflection point. The parameters are the following: 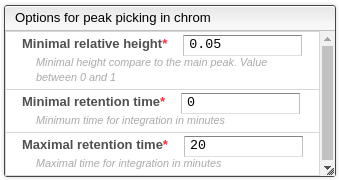 All the previous peaks can be modified : First select the corresponding line in the list of peaks, and then you should ALT + Click one at the beginning of the peak and once and the end of the peak in the chromatogram. This is also truth for new peaks. This peaks can be created using the button below the peaks table or clicking on the plus icon over the table.

Note: the automatic peak picking is going to replace the current peak selection, therefore is recommended to use it before the manual peak selection

When a peak in the list of peaks from the chromatogram is selected, the corresponding mass spectra is displayed, this mass values are selected using the following options: 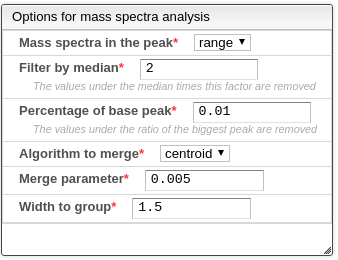 The current selected monoisotopic mass is selected from the most intense value in the multiplet with the highest mass. This value can be changed doing SHIFT ⇧ + Click over the mass spectra. This will select the closest peak in the mass spectrogram.

The result of the peak selection on mass spectrometry allows to have an experimental monoisotopic mass that will be matched against a set of possible molecular formulas. This process is controlled by the options: 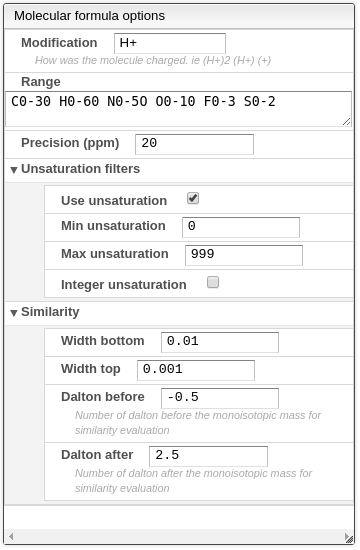